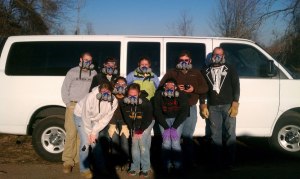 Imagine a church, half off of its foundation, sinking into the adjacent cemetery that is completely flooded. See the stretch of empty lots filled with debris from houses and overturned swing sets, all of which used to sit on an ocean front street four blocks away. Envision neighborhoods where all of the doors have a red sign saying that the home is uninhabitable. This is what I encountered as I journeyed to the neighborhood I would be working in. This was my 10th mission trip, but nothing could have prepared me for what I would be encountering during the time I spent helping the Staten Island community try to recover what they had lost.

While I was there, two of the homes I worked on were a block apart from each other and were owned by two brothers. The family worked alongside my group as we slowly removed flooring, walls and ceilings that had been damaged by flooding. As I worked, I listened to their stories about the day Hurricane Sandy struck Staten Island. They shared how their family escaped in time, but that some of their neighbors were not so lucky. They described to us the emotional and physical devastations they experienced in the days that followed the storm.

What struck me most about this family was that despite all that they had lost, they were still some of the most gracious and giving people I had ever met. Even though we were there to serve them, they wanted to serve us in return. By the end of the last workday, this tight knit family considered my group a part of their family. Through the work I did I shared in this family’s suffering, but also aided in their journey of hope as they continue to rebuild their lives.

One story I heard on the trip that embodies this was of a woman who lost everything during the storm. She was asked if she could have anything for her new home what would it be, and she simply said a doorbell so that, “I could have people over again.”