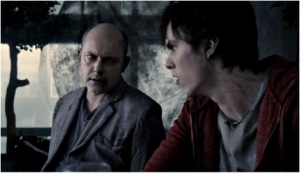 The new romantic-zombie-comedy “Warm Bodies” centers around a zombie named R. Known as R because he cannot remember what his name was when alive, he is just your everyday zombie. He spends his days lumbering around an area that has been closed off by the living, collecting random objects and lives in an airplane.

One day, while looking for humans to eat with other zombies, R finds Julie. When R kills her boyfriend, and eats his brains, he is able to see the man’s memories and feel the love he had for her. The impact of those emotions leads R to start having feelings for her, as well. As he falls in love with Julie, his heart starts to beat again and he regains some of his humanity.

The acting in this film is very mixed. Nicholas Hoult, as R, does well showing his slow change and makes him a believable character. Teresa Palmer as Julie is fair in some scenes, while in others she seems to be barely trying. Analeigh Tipton plays Julie’s best friend Nora. Although Tipton receives much less screen time than Palmer, she gives a much better performance.

John Malkovich as Julie’s father is acceptable, but really does not do anything of note. My favorite character was M, R’s zombie buddy, played by Rob Corddry. Corddry really sells the changes the zombies begin experiencing and has some of the best lines throughout the movie.

The make-up and look of the film was simple — kind of cartoony — and it gave a unique feel to the whole thing. However, a number of the computer effects really clashed with the appearance, such as when a zombie rips a huge chunk of flesh off his face and eats it, and it makes you wish they just went with practical effects.

This is the first movie I have seen by Jonathan Levine and his direction for this film is good, but uneven. This was mainly marketed as a comedy, but it really doesn’t stay on that tone. It is constantly changing from comedic to dramatic. The comedic parts like R’s inner monologues, the zombies learning to speak whole words and Nora’s reaction to her best friend falling for a zombie come across and succeed. However other parts, like the jokes about hoarders, fall flat.

The dramatic parts came from the human characters, and left a little something to be desired. While the humans appear to have somewhat adjusted to zombies existing, there are moments when you can feel the fear of the survivors.

The drama of the zombies is much more interesting. We never find out how the zombies were created, but the moments in which they start to become human again really did get my attention. I like how this movie took time to address the sadness that these zombies were once the parents, children and siblings of people.

Overall, this film was not bad. I wish it was a little more finely tuned in the comedy and storytelling. But, at a 97-minute running time, I left feeling that this was an enjoyable experience and that I wanted more. If a sequel and/or a tie-in comic book series came about, I would be very interested in checking them out.

I give “Warm Bodies” a 3.5 out of 5. While I believe there were many aspects of the film that could have been improved, I did get a lot of enjoyment out of watching.