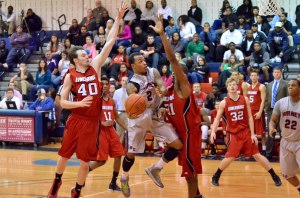 When Rob Pryor took over as Shenandoah University’s men’s basketball head coach in April of 2011, he knew a lot of work needed to be done. After all, the team was coming off of a season in which they went 4-21 with a roster that was comprised of players that were recruited by the previous coach.

Before coming to Winchester, Coach Pryor was an assistant coach for five years at his alma mater, the Air Force Academy. One of the first things his players noticed is that he began to implement a no nonsense type of style to S.U., similar to what you would see in a military setting.

“I love the culture that he brought in when he came,” said senior point guard Bryce Mitchell. “Personally, I wanted a coach who was big on discipline, and since Coach Pryor got here, the culture has been better.”

Last year couldn’t have started any better for the team, as they hosted the BB&T Tip-Off Classic and annihilated Patrick Henry College 76-23 in front of a huge crowd inside Shingleton Gymnasium. Unfortunately, that was the high point of the season for the squad, as they struggled in their first season in the ODAC, finishing 4-22 overall and 1-15 in the conference.

“It was a disappointment, and we were not expecting that type of season at all ,” Mitchell said of his junior campaign. “We lost some key guys because of grades, and the overall attitude of the team was horrible. I know for sure that some of the stuff that happened last season will not happen this season.”

According to Mitchell, the team working with head strength and conditioning coach Quintrel Lenore has also helped immensely, and Mitchell believes that the workouts they have been going through will help them throughout the course of the season.

Although the team is just now beginning their first practices of the year, that hasn’t stopped Coach Pryor and Bryce from coming up with some personal goals and expectations that he wants to see the team accomplish this year.

“I expect our team to be competitive in every game this season,” Coach Pryor stated, “and think we are poised to make a marked improvement from last season.”

“My goal for us is just to have a good season, point blank,” Mitchell added. ”We haven’t had a good season since I have been here and I’m determined to leave on a good note. I expect us to be very competitive and to win games. We have been losing for the past three years and I’m sick of it.”

As the roster stands right now, the Hornets have 12 returning players. This includes the seniors Mitchell, Avery Green and Kevin Lecsaint. Coach Pryor and the rest of his coaching staff have also brought in 10 recruits, giving S.U. an unusually large sized roster for a basketball team. Coach Pryor says, however, that this is just part of their plan.

“The advantage of having larger numbers is that it increases the level of competition in practice” Pryor said.  “I do not want anyone in our program to become complacent. I do not know if there is a true disadvantage to having numbers except that it is difficult to get everyone the reps I would like them to have in practice.”

This year, the team hopes to show people that they can be competitive in what is considered to be the top D-III men’s basketball conference in the entire country.

They understand that it’s not going to be an overnight transformation, but they’re all willing to put in the time to improving, both as players individually and as a team overall. The team chemistry is definitely there; now it’s just a matter of taking that chemistry, applying it to the court and achieving better results than in years past.

“As a team, there are a few things we must do,” Mitchell, the team’s captain, said. “We need to make open shots in the games, continue to improve our overall attitude, keep our grades up so everyone is eligible, and most importantly, trust each other and the coaching staff. If we do these things, then we will have a great season.”