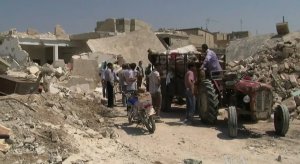 On Thursday, Oct. 31, international inspectors announced that Syria had successfully destroyed its chemical-weapons production facilities. The deadline for this to be accomplished was the following day, Nov. 1. The completion of this first stage bodes well for the Organization for the Prohibition of Chemical Weapons, the group working to rid Syria of its chemical weapons. However, according to OPCW the next step of destroying the actual weapons will be much trickier.

With the Syrian government seemingly complying with the United Nations and OPCW’s demands, the U.N. is now trying to establish peace talks to end the war in Syria. In recent days, diplomats have once again been trying to establish a peaceful political transition within the nation. While the details of how this would be accomplished are not clear, the plan was adopted last year by a number of U.N. nations including all five members of the Security Council. However, the agreement cannot come about without the Syrian government and the opposition coming to the table. Currently, neither are in Switzerland, where the negotiations are taking place.

Members of the opposition demand that President Bashar al-Assad resign before any kind of peace can be made, while the Syrian government states that there should be no pre-conditions.

The effects of the war have left millions of Syrians in need of humanitarian aid. Since the war began it is estimated that more than 100,000 people have been killed. Reportedly, more than 9 million Syrians currently require aid, and more than 6.5 million have been internally displaced. With limited access to visas, aid organizations are struggling to get into the war-torn nation in order to offer assistance. Refugees have flooded into the bordering countries, leaving these nations scrambling over what to do with them.