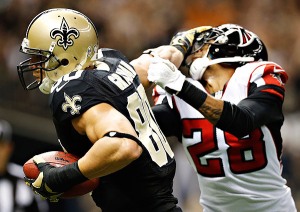 What was once considered to be a perennial powerhouse in the NFL, the NFC South has let fans down so far this season. With a conference that boasts the New Orleans Saints, Atlanta Falcons, Tampa Bay Buccaneers and the Carolina Panthers, at least two of these teams were expected to be in the playoff hunt by this time in the season. However, it appears that the Saints are on their way to winning the division and locking up a playoff spot. The Saints sit at 6-1, the Panthers at 4-3, Atlanta at 2-5, and the Bucs at a dismal 0-7.

Coming into the season on paper, the Buccaneers were a much-improved team. They brought in pro bowl defensive back Darrelle Revis, safety Dashon Goldson, kicker Nate Kaeding, and drafted defensive back Jonathan Banks and quarterback Mike Glennon. These additions were aiming to help the team reach the playoffs this season after just missing out last year. So far, this season has been nothing but a disappointment for the Bucs. They released their starting quarterback Josh Freeman; they lost running back Doug Martin and receiver Mike Williams to season ending injuries. This past week they were playing division rival Carolina. This game was as ugly as it can get for a team still searching for its first win as Carolina blew them out 31-13. The team is out of sync and it appears as though Coach Greg Schiano is now on the hot seat. This week doesn’t get any easier for Tampa as they play the Seattle Seahawks.

The Atlanta Falcons were one win away from reaching the Super Bowl last season losing to the San Francisco 49ers. This offseason, they brought in running back Steven Jackson, offensive tackle Sam Baker, defensive end Osi Umenyiora, and promising drafted defensive back Desmond Trufant. This season was thought to be Super Bowl or bust for the Falcons. The injury bug has hit them hard losing star receiver Julio Jones for the year while receivers Roddy White  and Seven Jackson have been in and out of the line up. Quarterback Matt Ryan has done all he can to win games, but the challenge has been tough with few weapons to go use. As White and Jackson make their way back from injury, look for Atlanta to start sneaking into the wild card race. This past week, the Falcons lack of depth was on display as Ryan threw four interceptions in the loss to Arizona. This week, the Falcons will look to get back on track as each game begins to become a must win and that starts as they travel to Carolina.

The Carolina Panthers have been a surprise team this year as they are second in the NFC South at 4-3. Cam Newton has been playing some of his best football as of late and the defense has been outstanding. The offense has been clicking as of late with Newton often finding Ted Ginn Jr, Steve Smith and Mike Tolbert for touchdowns. The Panthers are also looking to make at least the wild card this season after missing out last season at 7-9. If they can continue to play like they have been, and with the return of running back Jonathan Stewart coming this week, this could be a very dangerous football team.

The New Orleans Saints sitting at the top of the division with a record of 6-1. Coming into the season things were looking very promising for the Saints. They welcomed the return of their head coach Sean Payton after the whole bounty scandal, they brought in Rob Ryan to lead the new look defense, signed defensive back Keenan Lewis, linebacker Victor Butler, safety Jim Leonhard, offensive tackle Jason Smith, and drafted promising safety Kenny Vaccaro and the speedy receiver Kenny Stills.As long as they can stay healthy and the defense can hold its ground, look for the Saints as a possible candidate to represent the NFC in the super bowl. Last week, they dismantled the Buffalo Bills and look to continue the trend this week as they travel to take on Geno Smith and the Jets.

The NFC South looks to be in the hands of the Saints. The question remains: who can make the wildcard? With plenty of football left to be played this season, wait to see the answers to these questions unfold.