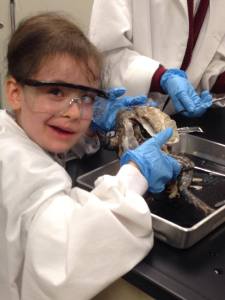 At 11:50 p.m. on Saturday, Oct. 26, Shenandoah University’s youngest alumna, Gabriella Victoria Miller passed away after an 11 month battle with brain cancer. About two weeks prior to her passing, 10-year-old Gabriella was awarded the Presidential Medal as well as an honorary diploma from S.U.

At the age of 9, Gabriella was diagnosed with an inoperable brain tumor the size of a walnut. Following her diagnosis she became a national childhood cancer advocate. After finding out she was eligible to receive a wish from the Make-A-Wish program, which she used to travel to Paris, she decided to give back to the program by starting a letter writing campaign to collect 10,000 letters to Santa through Macy’s. This project took off and in three short weeks, Gabriella and her “elves” had collected 250,000 letters. That was enough money to grant wishes to 36 children.

In addition to her letter campaign, Gabriella also co-wrote the children’s book, “Beamer Learns about Cancer” and started her own foundation. The Smashing Walnuts foundation is dedicated to finding a cure for childhood cancer. They achieve their mission through awareness and fundraising.

Gabriella touched the hearts of thousands of people and that was evident at her memorial service on Oct. 30. The gym of Heritage High School was packed full and children were even sitting in a group in the middle. The hallway leading up to the gym was lined with thousands of paper flowers made by Gabriella’s friends, family, fans and supporters from all over the world — including some from members of the S.U. community. The bottom of each vase was filled with walnuts.

All of the speakers shared the same sentiment that they are better people for having known Gabriella.  “Tattoo Tom” Mitchell, a childhood cancer advocate and friend of G, said it the best: “When you were next to Gabriella you just felt good inside … If you were ever lucky enough to have her wrap her little arms around your neck there was this feeling that washed over you this feeling like everything was going to be okay … like everything was okay.”

Long-time family friend, David Shapiro talked about Gabriella’s giggle. “It starts with a giggle. Then I think she giggles at her giggling. Then the mature young lady comes out as she tries to stop giggling, but I think that makes her giggle harder. Now she is in a full fit of giggling that can only come from a child.” The power of Gabriella’s laugh was later proven when an outtake of Gabriella’s interview for The Truth 365 documentary was shown. Just a few giggles from Gabriella had the whole audience giggling along.

“Based on data from 2005-2009, each year more than 4,100 children — 11 each day — are diagnosed with a brain tumor in the United States” according to the Smashing Walnuts Foundation. And every day in the U.S., seven children die of cancer. And, out of the small amount of cancer research funding, only four percent of that goes towards researching childhood cancer.

Gabriella was one 10-year-old girl with a passion for learning and helping others. She shared her message and inspired thousands of people from all around the world. She will be missed not only by her family and friends but also by the S.U. community.

For more information about the Smashing Walnut Foundation or to donate, go to www.smashingwalnuts.org.

Gabriella had a passion for writing poetry often times with “Tattoo Tom.” Below is a poem that wrote together titled “If Wishes Come True…

I swam like a fish to the bottom of the sea,

Then I flew to the sky like an eagle on the breeze!

Then I swung through the jungle from tree to tree

But I wished and I wished for something more;

So I sat for a spell on that jungle floor.

A genie came out from a lamp and said

“I’ll grant you three wishes, by the way, my name’s Ted!”

And these are the three things that I wished for.

It didn’t take long; that was easily done!

I wished for a hand to take away pain

With my second wish, I told him flat out

“Let people hear this whenever I shout.”

I told him I wanted them to hear my cry

From Hell down below, to the Heavens on high;

I didn’t want to waste the last one I got

I asked for some ideas to help me see

What was the best use of wish #3

“What do YOU want?” They both did say;

But the truth is, I didn’t want it that way!

So after a minute I knew what to do.

I wished for that wish to belong to you!