‘To Kill a Mockingbird’ production hits close to home 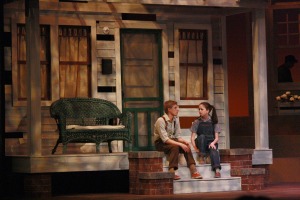 The cast of Shenandoah Conservatory’s production of “To Kill a Mockingbird” took its final bows before a packed house on Sunday, Nov. 17.  The production had netted the title of Ohrstrom-Bryant Theatre’s highest-selling straight play even before its opening night on Friday, Nov. 15. The play, based on Harper Lee’s literary classic of the same name, charts a community’s unjust trial of a black man for a crime he never committed and follows the life of the lawyer who comes to his defense.

The story of “To Kill a Mockingbird” is one of the most popular pieces of American literature that deals with issues of race, and its relevance still rings true in the modern consciousness. The cast was pushed to a state of complete openness regarding the emotional consequences of immersing itself in a culture fueled by hatred.

“I think that finding a way to live completely and fully within the world is beautiful, even when we have to accept the reality that people exist who carry different viewpoints than ourselves,” said senior musical theatre major Zac Ostrowski, who played the iconic attorney Atticus Finch. “As artists, we can cross over that gap, tell a story and still forgive each other at the end of the day.”

The historical context is closer to home than one might expect. In an act of collaboration between Shenandoah University’s theatre, history, and English departments, Warren Hofstra headed an investigation into Winchester’s segregated past and a case of Howard Walker, a black man accused and convicted of raping a white woman with little evidence.

The professor’s Virginia History class consulted with other professors and community members in addition to the Handley Regional Library in order to transform the lobby of Ohrstrom-Bryant Theatre into a historical display worthy of a museum.

Audiences were challenged to reflect upon the fact that such a similar case to that of “To Kill a Mockingbird” happened in the seemingly innocuous community of Winchester. Hofstra hoped that this historical understanding helped the audience find new meaning in the work: “The parallels and resonances between history and fiction—life and art—are truly eerie and very powerful.  Like Robinson in the play, Walker was ‘doomed’ from the time he was first charged with rape not by his guilt but by his race. The consequences for this black man should trouble and move us just as our sympathies for Robinson do.”

The production’s rehearsal process began weeks before as the cast and crew of over 50 artists began the massive task of breathing a detailed new life into a tired old town of Alabama in 1935. Helmed by director J.J. Ruscella and assistant directors Caleb Forsythe and Amanda Allen, the principal and ensemble cast members created individualized characters and histories in order to completely immerse themselves in the world of the play. Actors without lines in the script were expected to create intricate lives and relationships to fill the world of Maycomb and rose to the challenge, as senior musical theatre major Christopher Prasse noted, “There were no ‘extras’ on that stage—every character was a living, breathing part of that world.”

Sophomore acting major Seth Walker attributed his personalized development to Ruscella’s rigorous rehearsal process. “Being included in every rehearsal, you were so aware of the world and the part that you played in it.” The collective work of the ensemble members culminated in a “living intermission,” for which the actors remained on stage and in character for the duration of the 15-minute interval between acts.

The rest of the principal cast delivered equally impressive performances. The accusatory Ewell family fearlessly navigated the unsettling reality of life ruled by poverty and prejudice. Jem and Scout Finch and their visiting friend Dill presented a charming trio of children caught in a quintessential coming of age.

Miss Maudie, who functioned as the tale’s narrator, brought an inviting sense of warmth to the tale of Maycomb and lifted much of the novel’s prose into the realm of profound commentary. Tom Robinson, Reverend Sykes, and Calpurnia maintained exquisite individuality in perfect tandem with their positions within Maycomb’s tight-knit African American community.

Even the occasionally antagonistic townspeople Mr. Cunningham, Miss Stephanie, Miss Dubose, and prosecutor Mr. Gilmer were treated humanely and truthfully. This immersive work done by principals and ensemble members alike ensured that the world of Maycomb was lit with energy from the moment the house opened until the lights finally dimmed.

In a world still rife with prejudice and injustice, assistant director Caleb Forsythe hoped that S.U.’s “To Kill a Mockingbird” would help audiences realize their role in reaching a better future.

Tagged as: chris george, conservatory, play, to kill a mockingbird