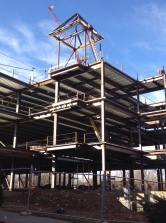 Though campus has been empty of students, faculty and staff over the last month, the construction crew has continued to make progress on the structure of the new Health and Life Sciences building, planned to open in August of this year.

This new building will house new classrooms, not only for the health professions and science classes, but also for all classes, and new meeting rooms and spaces on campus for students to hang out and relax during the school day.

Upon completion, it will be the biggest, and most expensive structure on campus.

According to Vice President of Student Life Rev. Dr. Rhonda VanDyke Colby, university officials and the construction crew are eager to get the building under roof so that any continued winter weather does not slow down construction.

Director of Physical Plant Barry Schnoor stated that the building should be enclosed around late March or early April.

Schnoor also said, “It’s at that point where weather becomes less of a factor on the schedule, except for exterior work like painting and landscaping.”

VanDyke Colby is excited to see this building in use because it will bring “health professions undergraduate and graduate students together” under one roof.

“Health care is moving towards a more integrated model,” concluded VanDyke Colby and this means that it is a good time to integrate all of these graduate programs into one school.

Many of the graduate health professions programs will hold classes and labs in this new building on campus, so we will have a more integrated undergraduate and graduate campus.

Though, according to Schnoor, we are several weeks behind schedule due to the many different snow falls we have had, hopefully, if the weather cooperates, the construction crew will continue to make progress.

VanDyke Colby also stated that President Tracy Fitzsimmons assured the staff and faculty that the building would be up and ready to use in August 2014 for the beginning of the 2014-2015 school year.