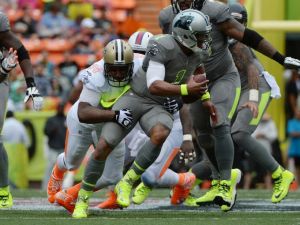 The Pro Bowl is the National Football League’s all-star game that is played annually in Hawaii by players representing the American Football Conference (AFC) and National Football Conference (NFC). Up until this year, the game was officially called the AFC-NFC Pro Bowl Game, but there were some changes implemented this year. The teams were no longer based on the two conferences, and were instead chosen by two team captains in a televised fantasy draft on Jan. 22. This year’s alumni captains were two of the greatest players to ever play in the NFL–  former wide receiver Jerry Rice and former cornerback Deion Sanders. Rice played for the San Francisco 49ers for the majority of his twenty years in the league and is arguably the greatest wide receiver to ever play the game. He is currently the NFL’s all-time leader in receptions, yards and touchdowns. Sanders holds the record for the most touchdowns by a defensive player, and was also a great kick and punt returner. Chuck Pagano of the AFC South winning Indianapolis Colts coached Team Sanders, while Ron Rivera of the NFC South winning Carolina Panthers coached Team Rice. These coaches were selected for coaching the highest seeded team to not qualify for their respective Conference Championship Games, which has been the tradition since the 2009 Pro Bowl. This year, there was more incentive to win the game; the players on the winning team received $53,000 while the losing players received $26,000.

Team Sanders struck first when Indianapolis Colts quarterback Andrew Luck found Philadelphia Eagles’ wide receiver DeSean Jackson for a 36-yard touchdown in the first quarter. Drew Brees connected with Jimmy Graham, both of the New Orleans Saints, on an 8-yard touchdown pass to put Team Rice on the board in the second quarter. A few minutes later, Cam Newton (Carolina Panthers) scored to make it 14-7 Team Sanders. Newton’s score was followed by a touchdown catch by Josh Gordon (Cleveland Browns) from Philip Rivers (San Diego Chargers) to tie the game at 14. Neither team scored in the third quarter, and it wasn’t until there was 4:41 left in the game that the tie was broken. Jordan Cameron (Cleveland Browns) caught a pass from Nick Foles to put Team Sanders in the lead 21-14. The final minute of the game had its share of excitement. With 42 seconds left, Team Rice’s Alex Smith (Kansas City Chiefs) threw a touchdown pass to DeMarco Murray (Dallas Cowboys) to make the score 21-20 in favor of Team Sanders. Rather than kicking the extra point and tying the game, they opted to go for two and the win. Mike Tolbert (Carolina Panthers) ran in the two-point conversion and gave Team Rice a 22-21 lead. However, that left enough time for Team Sanders to drive down the field and put themselves in field goal range. Foles found Jason Witten (Dallas Cowboys) twice for big gains, and that gave Justin Tucker (Baltimore Ravens) a 67-yard field goal attempt to win the game. Unfortunately for Team Sanders, Tucker’s kick was short and Team Rice held on for the one point victory.