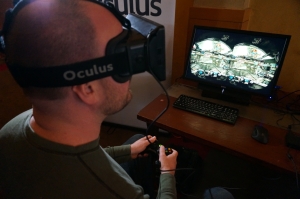 The Oculus Rift is one of the most anticipated and groundbreaking products to happen to the video game industry in years. There have been countless innovations to graphics and game play in video games, but the promised re-introduction of virtual reality is going to add a completely new dimension to the way we play video games if the Oculus Rift is a success.

The concept of virtual reality has long since been abandoned after many failed attempts to make it more than a stand-alone gimmick console. Virtual reality is a computer-simulated environment that makes the player feel as if they are actually in a simulated world. Virtual reality does this by blocking out other visual stimuli and incorporating motion-detecting devices to respond to the player’s movements. The Oculus Rift is a virtual reality head-mounted display that promises to succeed where all of its predecessors failed. Marc Perton of engadget.com says, “With its latest prototype, code-named ‘Crystal Cove,’ Oculus VR has taken a massive leap forward, eliminating the stomach-churning motion blur that has plagued previous generations of VR headsets, and adding sensors and a camera to track the position of both your head and body and provide more accurate simulated movement.”

The Oculus Rift is a new virtual reality headset that is being developed by Oculus VR with a slated release date of late 2014. The Oculus Rift garnered 2.1 million dollars in support through Kickstarter by people excited by the promise of a whole new dimension of video games. The Oculus Rift hopes to put the player in the middle of their favorite video games by creating a headset that shuts outside sights and replaces them with visuals generated by video game developers.

Virtual reality is a medium that was long since dead and a considered a joke by many video game-enthusiasts. They felt the concept was reserved only for dated ‘90s films, but the Oculus Rift appears to have won over many skeptics. Oculus Rift has already garnered many awards from CES, and is being hailed as one of the most exciting things to happen to the industry in years.