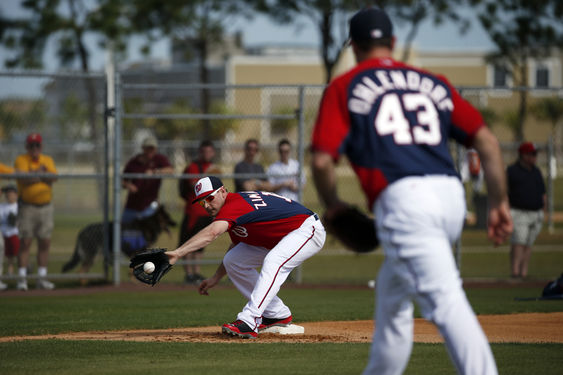 While it doesn’t feel like it here in Winchester, the Major League Baseball season is right around the corner. All 30 teams are in either Arizona or Florida for spring training, which lasts until the end of March.

For those unfamiliar with baseball, spring training is a series of practices and exhibition games preceding the start of the regular season.

This allows new players to try out for roster and position spots, and gives existing team players practice time prior to competitive play.

Spring training officially kicked off on Feb. 6 when the Arizona Diamondbacks had their pitchers and catchers report.

In the American League, the Boston Red Sox are looking to repeat as World Series champions.

Their biggest signing may have come in the form of Japanese pitcher Masahiro Tanaka, who dominated for many years in Japan.

Just those four players cost the Yankees over $400 million, proving they’ll spend any amount of money to get the guys they want.

However, New York lost their star second baseman Robinson Canó when the Seattle Mariners signed him to a ten year contract worth $240 million.

In the National League, the St. Louis Cardinals will look to reach the World Series again after Boston defeated them a year ago.

Their task will be much more difficult with the loss of Carlos Beltrán to the Yankees.

The Washington Nationals were perhaps the biggest disappointment in the National League last year, but they may now have the best pitching staff in baseball thanks to the addition of Doug Fister from the Detroit Tigers.

On paper, they appear to have as complete a roster as any in the league and will look to regain the form they had when they won 98 games in 2012.

There are other headlines surrounding Major League Baseball as the 2014 season approaches.

New York Yankees’ shortstop and captain Derek Jeter recently announced he would be retiring at the end of the season.

Jeter is one of the best to ever play the game and will for sure be a Hall of Famer.

Another headline involves another famous Yankee, Alex Rodriguez, and his use of performance-enhancing drugs.

A-Rod was suspended for the entire 2014 season without pay, possibly leading to the end of his career.

The final big headline from this offseason has to do with instant replay.

With the technology available in this day and age, many have wondered why Major League Baseball has not taken advantage of it. Under the system this year, there will be a challenge system.

Each manager gets one challenge per game, and gets to keep it if he wins a review.

If a manager runs out of challenges then the umpire can chose to review any reviewable play after the six inning.

The upcoming Major League Baseball season promises to be an exciting one with a lot of good teams competing for the five playoff spots available in both the American and National Leagues.

The Red Sox are looking to repeat and win their fourth championship since 2004, but the other 29 teams around the league will give Boston their best shot and are determined to dethrone the reigning champs.

The first of the regular season games begin on Sat. Mar. 22 with the Baltimore Orioles playing the Tampa Bay Rays in Port Charlotte, Fl. Opening day is on Mar. 30 and 31.