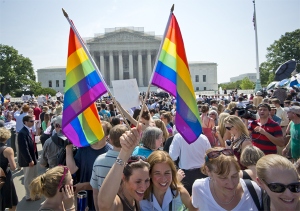 Judge Arenda L. Wright Allen of the United States District Court for the Eastern District of Virginia wrote “Our Constitution declares that ‘all men’ are created equal, surely this means all of us” according to the NY Times.

Wright Allen stated in her 41-page opinion that “none of the reasons proponents offer for denying same-sex marriages make legitimate government interests.”

This victory for equal rights is a small one because it is already held up in appeals. Same-sex couples will still not be able to get married in the state of Virginia until the case is resolved. Experts believe that if this ruling it held after the appeal, it could cause repercussions throughout the South. Because several other Southern states have similar amendments, if Virginia’s amendment is found unconstitutional the others would be as well.

A federal judge in Kentucky also ruled on Wednesday, Feb. 12 that the state’s refusal to recognize same-sex marriage violates the 14th Amendment, which states that no government “shall…deprive any person of life, liberty or property, without due process of law; nor deny to any person within its jurisdiction the equal protection of the laws.” However, couples still cannot get married in the state.

Virginia will be the first Southern state that allows same-sex marriage.

A similar court case on same-sex marriage began on Feb. 25 in Michigan. April DeBoer and Jayne Rowse, two nurses who live in suburban Detroit, are fighting the 2004 constitutional amendment in Michigan saying that if violates their rights under the Equal Protection Clause of the United State Constitution. The originally began in 2004 when the couple fought for the right to adopt each others’ children and their lawyer told them to go further. The judge in the case allotted two weeks for witnesses and testimonies before reaching a decision.

With another same-sex victory underway in Virginia, all eyes will be watching Michigan to see what happens there.