Tension increases between Ukraine and Russia 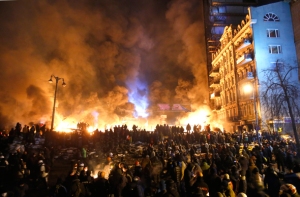 Since Nov. 2013, there has been continued turmoil in Ukraine. Ukraine’s government fell in November, when their former president, Viktor Yanukovich, dropped a bailout deal with the European Union and instead took an offer for a $15 billion bailout from the Russian government, according to Reuters.

Subsequently, Ukrainians have been very impatient and angry at their government’s choices resulting in many riots and demonstrations in the streets of Kiev.

In Nov. and Dec. 2013, hundreds of thousands of protestors gathered and camped out in Kiev to recall Yanukovich as president. The police were very forceful, even spraying tear gas at the protesters.

Protestors became very violent when shots were fired and police force had to clear the protesting camps in Kiev on Feb. 18, said B.B.C. News. It is unclear who fired shots first.

Between Feb. 20 and 21, 77 people had died, and 600 more were wounded, where “Yanukovich denounces bloodshed as an attempted coup,” according to Reuters.

On Feb. 22, Yanukovich fled his office in Kiev, because of the attempted coup, and Ukraine declared new ministers for their government, leaving Yanukovich a fugitive “indicted for ‘mass murder’ over demonstrator deaths” as stated by Reuters. B.B.C. News said Olexander Turchynov was chosen as interim president, and there was an arrest warrant issued for Yanukovich. Opposition leaders set new elections for May 25. In response, Russia prepared 150,000 troops for invasion by putting them on “high alert” on Feb. 26.

The next day, the Russian flag was raised in Crimea, as armed men seized the Crimean parliament. A.B.C. News stated, “Putin rationalized the invasion by explaining to German Chancellor Angela Merkel that he needed to protect ethnic Russians in Crimea from ‘ultra nationalistic forces’ in Ukraine. Crimea is made up of about 60 percent Russian people. In plain language, Putin is arguing that a group of anti-Russian extremists now in power in Ukraine were a threat to Russian-speaking people who live in Crimea.”

On Mar. 6, the pro-Russian constituents in Crimea planned on a referendum set for Mar. 16. According to Reuters, “U.S. President Barack Obama says referendum would violate international law and orders sanctions on those responsible for Moscow’s military intervention in Ukraine.”

From Mar. 6 on, many countries’ political leaders have warned Russia on their political and military tactics regarding Ukraine, including President Barack Obama, British Prime Minister David Cameron and French President François Hollande. These political leaders of the U.N. have warned Russian President Vladimir Putin that if he continues his military invasion of Ukraine, there will be sanctions for these actions in the near future. Specifically, on Mar. 8, “The US and France warn of ‘new measures’ against Russia if it does not withdraw its forces from Ukraine”, according to B.B.C News.

On Mar. 12, Obama invited interim Prime Minister Arseniy Yatsenyuk of Ukraine to show the United States’ support of Ukraine and to pledge to stand with Ukraine.

As tension increases in Eastern Europe, it is unknown whether there will be a full Russian takeover of the Crimean peninsula.