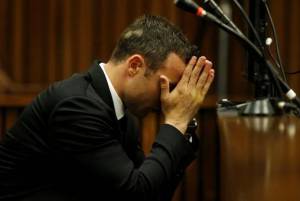 The trail of South African track star, Oscar Pistorius, began on Monday, Mar. 3 in Pretoria, South Africa. He is charged with one count of premeditated murder of his 29 year old girlfriend, Reeva Steenkamp, along with two separate gun indictments from prior incidents, according to CNN.

Pistorius was the first double amputee to complete in the 2012 Summer Olympics in London and had won six Paralympic gold medals. Steenkamp was law school graduate with a rising career as a model and was about to have her own reality television show. According to Pistorius, they both were very much in love at the time of her death.

Around  2 a.m. on Feb. 14, 2013, Pistorius claims he awoke in bed believing that there was a burglar in his toilet room– break ins are very common in South Africa. Thinking that Steenkamp was still in the bed, Pistorius grabbed the 9 mm Parabellum pistol from under his bed and quickly made his way into his bathroom. Upon finding the only unbarred window in his house open, Pistorius concluded that the burglar was in the small room off the bathroom that housed the toilet. He proceed to fire four times through the locked door. After returning to the bedroom to put on his prosthetics and realizing that his girlfriend was not in bed as he assumed, he broke down the bathroom door finding Steenkamp– where she later died in his arms.

The defense are painting a different picture during the trial. They argue that Pistorius and Steenkamp were heard fighting earlier that day by neighbors and Pistorius killed his girlfriend in cold blood.

Pistorius does not deny that he killed his girlfriend but the main argument between the defense and the prosecution is whether it was premeditated or if it was just a terrible but understanding accident.

The witnesses ranged from neighbors, ex-girlfriends and the senior police office on the case. According to CNN, “the police investigation sounded in court like a catalog of bumbling, bad judgment, poor memory and petty theft.” This testimony did not help the prosecution with their case. Their offenses include: handling the weapon without gloves, losing one of the Olympic athlete’s valuable wristwatches and improperly handling thus contaminating evidence. Police Col. G.S. van Rensburg ended up resigning from the force in Dec. 2013 after three decades while under fire for his handling of a large piece of evidence– the bathroom door.

Since South Africa does not have jury trials, Pistorius fate rests in the hands of Judg Thokozile Masipa. “Premeditated murder carries a mandatory life sentence with a minimum of 25 years” according to CNN. And Pistorius could face an addition five years for each gun indictment and 15 years for a firearms charge. However, the verdict will take a while since it appears the trial will still take several weeks.