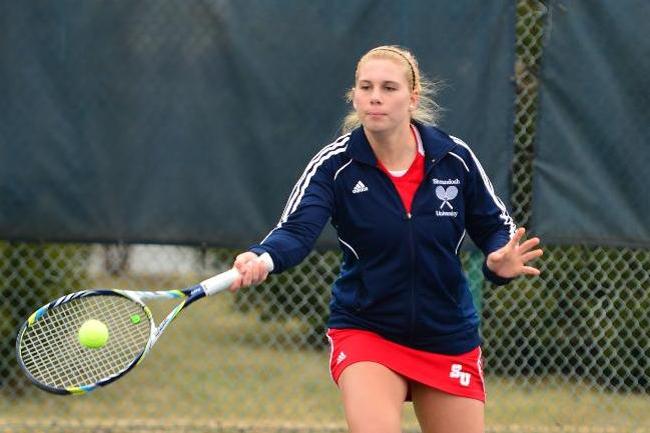 Despite the poor weather we’ve had in Winchester since the spring semester began in January, some sports teams are having very good seasons so far. One of those teams is the S.U. women’s tennis team, who has started their season 6-1 (2-1 in the ODAC) and are currently on a five-match winning streak. The only match they have dropped thus far as a team came on March 9 when they took on Washington and Lee who was ranked number 22 in the country at the time. They took care of business against the other two ODAC teams they played as they beat Guilford 7-2 on March 22 and Emory & Henry 5-4 the following day. The key to their success has been productivity throughout the entire team and not just one player. In singles, Molly Barb has played as the number one, with Shannon Allin as the number two, Amy Rapp as number three, Rachel Gross at number four and Amber Lake at number five. Rapp leads the team in individual victories with six and is currently on her own five-match winning streak. Lake has five wins and has won four out of her last five individual matches. Barb and Gross have both collected four victories individually. In doubles, Allin and Barb have been playing as the number ones, with Gross and Lake playing as number twos and Rapp and Caitlin Tilton playing as the number threes. All three duos have won at least three matches, with Gross and Lake tallying four victories together thus far. The ladies have seven ODAC matches remaining and currently sit fourth in the standing behind aforementioned Washington and Lee, Roanoke and Bridgewater. There are eleven total matches remaining in their season and seven of them are home matches right here on S.U.’s campus. So if you’re looking for something to do on a nice spring day, come out and support the women’s tennis team as they continue to climb in the ODAC standing.

On the men’s side, they started off their season strong by defeating Hood 9-0 on February 15 and Ferrum 6-3 on March 14. Since then the men have dropped four straight and their record currently stands at 2-4 (0-3 in the ODAC). Like the women’s team, the men have gotten production from all seven players on their roster. Of the seven, five men (Steven Baker, Dustan DeMello, Will Leach, Zach O’Neal and Kelly Sykes) all have collected two victories in singles and the other two members (Brett Holmes and Wes Licklider) each have one win. Baker has been playing at number one, followed in order by number two Leach, number three O’Neal and number four Sykes. On the doubles side, the number one spot has been occupied most of the season by Baker and Licklider, followed by the duo of Leach and O’Neal at number two and Sykes and Holmes at number three. Looking ahead, the men have nine matches remaining, seven of which are ODAC matches with four total home matches remaining. Just like with the women, if you want something to do when the sun is out and the temperatures and nice and warm, swing by the tennis courts and support the men as they continue on with their season.