Haim sticks to its alternative and indie roots 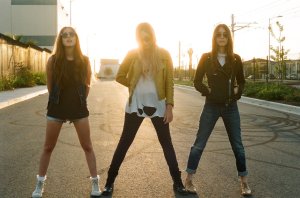 A dust storm reportedly rolled in duA dust storm reportedly rolled in during the 2014 Coachella Music Festival. But luckily the girl-rock group Haim performed before the unfortunate weather occurred. The three sisters, Alana, Daniella and Este Haim sang and danced on one of the day stages during the two-weekend festival. With a set featuring songs from the fairly new 2013 album, “Days Are Gone,” the girls brought some of the classical feelings Coachella regulars wanted from the event.

Coachella is known famously as a music festival designed for independent and alternative artists. Instead of booking radio hits like the Woodstock Festival did, Coachella brought in performers mostly for their underground artistry. For 2014, the festival seemed to stray towards mainstream artists such as Justin Bieber, Ellie Goulding, Pharrell Williams, Lorde and Bastille. The first weekend had a line-up purely made from well-known pop artists and even EDM DJ’s like Skrillex. Coachella veterans felt the shift towards pop almost every hour, but Haim brought some of that Alternative and Indie atmosphere back on both weekends.

As one of the breakout acts of Coachella, Haim’s front-women hail from the San Fernando Valley in California. Before performing as a sisters-only group, they were part of their family band, Rockinhaim. Rockinhaim played sets that included songs from their biggest influences, such as The Beatles, the Eagles and Billy Joel. It was Haim’s first time onstage at Coachella, but they are no strangers to the being at the festival. In a Teen Vogue interview, one sister revealed that the three of them enjoyed it illegally by sneaking in ever since 2005.

During their time on stage, the Haim sisters performed seven songs from their album and a Fleetwood Mac cover of “Oh Well.” The oldest, Este, looked like she thoroughly enjoyed being onstage with her bass, as her facial expressions switched between excited and pained. Alana danced and enhanced the crowd’s mood with large drums and her guitar. The youngest, Danielle, stayed at the center as lead vocals and guitar. Audiences seemed to respond well to the overall performance especially when the girls took the time to connect with the onlookers by speaking during brief breaks in between songs.

While the girls take the stage well, their lyrics tend to stay above the surface. Generally, their songs do not require much substance, and listeners probably will not gain much enlightenment from the words. The first song of the album and also of their Coachella set, “Falling,” is one song that does speak about soul-searching, but most of their other songs have themes of love and breakups. The music, meanwhile, is reminiscent of their early ‘60s and ‘70s influences. All of the songs on the album combine soft rock, R&B  and pop to create a diverse style of music. A big plus to the album is the lack of music editing that is required in the studio. The songs remained close to their live-recording. Each of the sisters’ versatility on various instruments along with the retro vibe of the songs will entice listeners into staying on for the full album.