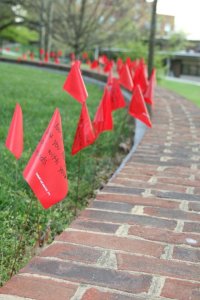 Starting on Oct. 27 to the 31, the Not Just Women’s Center will be hosting a table event in the student center for the Red Flag Campaign. The Red Flag Campaign is about domestic violence awareness and learning to recognize the “red flags” or warning signs of an abusive relationship.

The Red Flag Campaign began in the fall 2005 when the Virginia Sexual and Domestic Violence Action Alliance submitted a proposal to the Verizon Foundation to form a multi-year partnership. The aim of this campaign was to create the first statewide education and awareness campaign designed specifically for dating violence on college and university campuses in Virginia. The campaign has three focuses: to target on friends/peers of victims or perpetrators of dating violence, educate friends/peers about the “red flags” and encourage friends and peers to speak up on dating violence situations. There are currently fifteen partner campuses participating in Virginia and even more around the country.

During the week of the Red Flag Campaign, students can walk up to the table and ask any question they have, and they can also write a warning sign on a red flag. There will be warning sign suggestions at the table if a student is not sure what a sign is, or they can write one themselves.

There is also a wealth of information and statistics collected by the campaign on the website. For example, in a study survey done with 6,000 women across 32 campuses across the United States, one in four women were victims of completed or attempted rape. It was also shown that 84 percent of the women knew their attacker. 42 percent of the rape victims told no one about the assault, and only 5 percent reported to the police.

If you are a student that has knowledge of an abusive relationship on your campus, the website has tons of links and hotline numbers for information. They can accommodate everyone. There are hotlines for the LGBTQ (lesbian, gay, bisexual, transsexual or queer) community and also a link to RAINN (rape, incest and abuse national network). If a students want to learn more about the Red Flag Campaign, they can visit the website, http://www.theredflagcampaign.org. There is also a link to the Facebook page on the website.