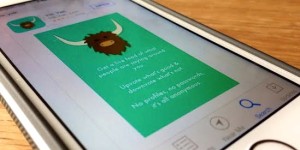 Whether you love it or hate it, Yik Yak is a very popular app on campus right now. Yik Yak is an app very similar to Twitter with one major difference– it is anonymous. That’s right. No signing in and no username. No one knows who is posting or who is reading. All you have to do is type in your zipcode and the app will pull up every Yik in your area. So while at school, you will be receiving Yiks for members of campus community.

Founded by Tyler Droll and Brooks Buffington, two Furman University graduates, Yik Yak was launched in 2013 and is currently the 20th most downloaded social media app in the United States according to Saycampuslife.com

The owners of Yik Yak describes it as “a local bulletin board for your area by showing the most recent posts from other users around you. It allows anyone to connect and share information with others without having to know them” on it’s iTunes page. They go on to say “news, funny experiences, shout outs and jokes spread faster than ever through Yik Yak’s tight-knit community.”

While that description sounds great, that is not how students on our campus and many other campus use it. Don’t get me wrong, there are some slightly amusing or entertaining Yaks that pop up every once in a while; however, most of the time the Yaks are of a sexual nature or things of childish nature. Some of them are things that you never want to know even if the person remains anonymous.

While we have not had any major incidents on campus, other campus, both colleges and high schools, have had outrage incidents that lead to the app being banned from campus and the police becoming involved.

The president of Norwich University in Vermont has blocked access to Yik Yak on all university computers because some students at the Vermont school have become targets of cyber bullying.  The university’s president, Richard Schneider says “he knows that students can reach the application through smartphones that don’t use the college computer system, but he felt he had to do something to protect Norwich students” according to USA Today College.

At Ludlow High School in Ludlow, Mass., 18 year-old Matthew Kurtz was arrested in Sept. 25 for making anonymous threatening statements on Yik Yak according to WWLP.com– Ludlow’s local news source. The police state that Kurtz implied that a potential shooter would be going to Ludlow High School that Thursday. According to the article, “police were able to track the suspect down by working with the legal staff at Yik Yak.” Kurt is being charged with threat to commit a crime, disturbing of a school in session and making a false report relative to a firearm.

So Shenandoah University, keep it clean and remember some things are better off not said.