Shenandoah University brought students together in remembrance of Martin Luther King, Jr. on Jan. 19, 2015. The MLK Day of Service called upon the S.U. community to pick “up the baton handed to us by past generations” and carry “forward their efforts” along with the rest of the United States, according to the Corporation for National and Community Service. On that Monday, classes were cancelled, but students were asked to participate in community service activities, rather than taking the day off.

On campus, Spiritual Life spent the entirety of the day running a number of events. At 11 a.m., Reverend Gil Caldwell showcased his documentary, “From Selma to Stonewall,” in the Brandt Student Center for free. Rev. Caldwell is known as a clergyman, a veteran of the Civil Rights Movement and as a friend of Martin Luther King Jr. He took part in historic events such as the March on Washington in 1963. After the screening, questions and comments were open for those who attended; food was also provided, while people talked with Rev. Caldwell.

From 2 p.m. to 4 p.m., many students, including many S.U. sports teams, participated in the Stop Hunger Now event that was being held in the Shingleton Gym. Stop Hunger Now is an event unique to Shenandoah. Held occasionally throughout the year, students are always invited to help package and organize food for the less fortunate overseas. The event, though, started a few minutes after 3 p.m. due to the bags that were to be used for packaging were still in Northern Virginia, so students had to patiently wait before beginning packing food.

At 4:30, lights lined along the sidewalks, and the S.U. community gathered at BSU as part of the candlelit memorial walk to Armstrong Hall for the 5 p.m. worship service. The main stage inside was decorated with a grand piano, a display of candles and crafted orgami cranes in a blue net and chairs for the choir, performers and speakers. Those part of the memorial walk came in one by one and either took their places in the audience or on stage. The service was filled with inspiring readings from people like Rev. Caldwell and student Muslimaa Musawwir, music from choir singers and musicians from the Conservatory and prayer. After the service, dinner was served in Allen Dining Hall, where everyone who attended was encouraged to go to and discuss with Rev. Caldwell.

Nationally, U.S. citizens were taking part in community service as well. President Barack Obama served at the Boys and Girls Club of Greater Washington by reading to young students. The entire Obama family prepared meals for local shelters at the D.C. Central Kitchen.

Shenandoah University used to host Partnership with Community Day annually until 2011, so in replacement, the university takes part in the MLK Day of Service. While the “day off” originally seemed to serve as a day to either catch up on work or relax, the day was meant to serve as a day to help in the local community and reflect on Martin Luther King, Jr.’s legacy. paper will conclude by looking at the 2008 Presidential elections and the impact the mass media had on it. 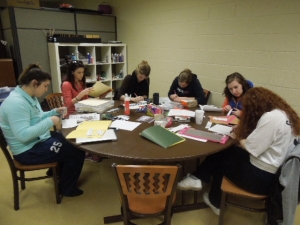 ’DOAH PHOTOS COURTESY OF DIANE PAINTER
Another Martin Luther King Jr. day activities was making games for Hadley High School Special Education and Youth Development Center. Sixteen students and four professors took part in this event and made over 25 games for the center.