‘That Awkward Moment’ shows the male perspective in a romantic relatioships 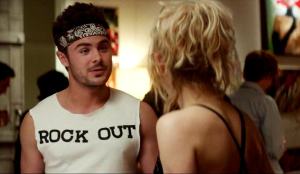 In his latest film, “That Awkward Moment,” director Tom Gormican highlights the awkwardness that occurs in relationships. You know that moment in a relationship when it either develops into something more or just fades and fizzles out? For most of us, those moments have been joyous, uncertain, awkward and sometimes painful. Sounds like the potential for another pretentious romantic comedy, but what gives this film its edge is it is shot from a male perspective.

If you saw the film’s trailer, you might have written it off as just another fun romantic comedy. “That Awkward Moment” was surprisingly not entirely humorous, nor was it entirely romantic. This being said, the film was overall successful. I believe its success is mostly due to the likability and the acting ability of its up-and-coming cast as well as the film’s emotional depth.

The plot follows three best friends, Jason (Zac Efron), Daniel (Miles Teller) and Mikey (Michael B. Jordan). These college buddies make a pact to remain bachelors after discovering that Mikey’s wife (Jessica Lucas) cheated. Each of the guys has to deal with their own struggles after abiding to this agreement. Newcomer Imogen Poots plays Efron’s love interest and the female lead, Ellie. Although there was a tangible chemistry between Jason and Ellie, they are not the characters that portray the most realistic relationship.

The least spontaneous of the three, Jordan’s character, Mikey, portrays heartbreak in a way the audience can all relate.

Despite the encouragement from Jason and Daniel to go out with a bunch of women to spite his cheating wife, he instead chooses to try to mend that broken trust. He later learns, like all of us, that some things are better left broken.

Actress Mackenzie Davis, Teller’s love interest, had more depth than Poots character did. Davis acted as a sort of “wing woman” for the guys in the beginning of the film by introducing the guys to other women. But it is obvious that there is an attraction between him and Teller. Teller’s character reaps most of the benefits from that arrangement,  playing out the friends with benefits scenario, until he falls for her.

One of the film’s main messages is what defines a relationship. At one point Efron’s character fails to be present for Ellie at a time when she needs him most. This incident leads into the moral of the entire film; relationships are all about being there for the other person.  The bromance between the guys is what ultimately makes this film. Their friendship is showcased as the ideal relationship. Isn’t friendship the basis of a wonderful and fulfilling relationship anyway?

This film appeals to both men and women. Women will be drawn to the possibility of getting a peek into the male psyche (especially a male psyche that is attractively packaged in the form of Zac Efron) while men will enjoy the raunchy humor and the blunt honest portrayal of their gender.

If you haven’t already seen it, you can still catch showings at both the Apple Blossom Carmike Cinema and the Alamo Drafthouse.